Germany has one of the strongest economies in Europe: German companies with strong sales enjoy a high international reputation. Small and medium-sized (SMEs) German companies drive the market, and "Made in Germany" is the international hallmark of extraordinary quality. German economic policy promotes a broad and competitive industrial environment with a strong focus on innovative future technologies. No wonder that German products are global export hits! Additionally, Germany is well integrated into the global economy.

This enables German companies to gain and exchange knowledge, products and employees in a global network. We show you which companies from Germany stand out and in which industries the largest German companies are located.

There are two options to define the largest German companies. The first is to look at DAX listed companies: The German stock index (DAX) tracks the performance of the 40 largest companies in the country (DAX-40 companies). You're probably familiar with many of them. They include Zalando, SAP, Siemens, Adidas, Allianz, Airbus, Volkswagen, Daimler or Deutsche Telekom.

However, there are also large German companies that are not in the DAX, or are not a stock corporation (in German: Aktiengesellschaft, in short AG) at all. A good example here is Europe's largest trading company: the Schwarz Group. You will probably be more familiar with the name of their stores: Lidl. Aldi—its big counterpart—is also one of Germany's largest companies, but it is not a stock corporation. Then there's the technology and services company Robert Bosch, which easily outperforms most DAX companies in terms of sales.

Biggest German companies according to market value in 2021, source: statista.de

The Most Important Industries in Germany

The most important or/and the largest industry in Germany is the automotive industry. It has an annual turnover of around 438 billion euros. Cars from Mercedes (also in the DAX), Audi or BMW are regarded as status symbols all over the world. And of course, who hasn’t dreamt of a Porsche? 😉

The second sector may not immediately come to your mind, yet it is very important for the German economy and the perfect example of domestic technology: the mechanical engineering industry. Its sales amounts to almost 256.88 billion euros. Above all, medium-sized companies such as Krones, Harro Höfliger, and KHS ensure precise, safe, and reliable production processes all over the world—in food and beverage production, for example, or in the manufacture of pharmaceutical products.

The chemical-pharmaceutical industry generates an annual sales of 198.27 billion euros, making it another important component of the German economy. German companies such as BASF, Bayer and Merck are among the big players in a highly competitive global market.

But also the food industry turns over nearly 185.3 billion euros annually. Much of what you eat and drink regularly can also be found on supermarket shelves abroad—German beer in particular is popular all over the world. The electronics sector follows close behind with 181.6 billion euros. Alongside Siemens, there is Infineon, for example—German company that has been operating successfully in this field for years.

Why German SMEs Are Unique in The World

For Germany, it doesn't always have to be the big players. Small and medium-sized German companies (SMEs), which are usually family-owned and based in smaller towns, make up the so-called Mittelstand. Companies like Krones or Webasto certainly don't have the prominence of German firms like Siemens, BMW or Bayer. If world market share were the toughest criterion for a company's international strength, many mid-sized companies would be true superstars! Whether they produce machine parts, chemicals or software—SMEs are generally strong, reliable and successful.

These hidden champions pool their resources to be superior in areas that customers value most. That includes product quality, customer proximity, service, the quality of employees, technology leadership and innovation. They expect themselves to meet the same high-quality standards in foreign markets as they do in their home market. Even a really good product sometimes breaks down and needs to be repaired, and these German companies see no reason to lower their service standards abroad. For this reason, they tend to build strong service networks wherever they do business.

Medium-sized German companies are masters of global competition, but so far have remained largely hidden from view. First, most of their products are used in the manufacturing process or go into the final product. These products are therefore invisible to the consumer. Many times, German SMEs actually enjoy invisibility and do not necessarily want to be in the spotlight.

Start-ups in Germany: Where the Innovation Is

When you think of start-ups, you may instinctively think of hip companies, started in garages, in California or New York. But even if there aren't quite as many success stories as in the U.S., Germany certainly has some pretty cool and successful startups, too.

You may be familiar with the online bank N26 or the Neo-Broker Trade Republic The online translator DeepL is also very well-known. Anyone who manages to overcome the bureaucratic hurdles has good prospects of success. At the same time, TV formats such as "Die Höhle der Löwen" (English “Shark Tank” or “Dragons’ Den”) inspire people who want to start their own business and offer support to (young) founders. The German start-up scene is also gaining in importance thanks to increased public and private funding. In the long term, this should lead to the creation of even more successful German companies.

As already mentioned, German companies export all over the world. When it comes to the Asian market, car manufacturers are very popular. VW now sells one in four of its cars in China. The demand for cars "Made in Germany" is gigantic. Whether it's double-glazed windows or furnishings, machine tools or jewelry, the Chinese in particular are willing to pay a lot for their own homes with German products in them.

The USA is also a very important market for products from German companies. In addition to cars (of course), technology in the B2B sector is particularly in demand. Besides, Continental, Linde and Bosch, DHL is also an important German representative on the American market.

Germany's neighboring countries like the Netherlands, France and Poland also have strong ties with German companies in terms of trade.

The trade relationship between German companies and Russia is currently rather explosive. For a large number of German companies, Russia is an important sales market—at least up until now. Sporting goods manufacturers such as Puma or Adidas, Ritter-Sport or Bayer earn a lot of money there. The trading companies Metro or Henkel are also at least to some extent dependent on business in Russia. And of course, German cars are also in great demand in Russia as a status symbol.

How do I Find German Companies Relevant for My Business?

If you are looking for suitable suppliers, interesting sales partners or potential customers, you have several options to find them. The fact that there are many companies in Germany can be a challenge though.

If you want to find the biggest German companies in a certain industry, you can, of course, look for them on the internet. However, this is time-consuming and costly. And even if you find appropriate registers, you have no guarantee for their accuracy and completeness.

Of course, you can also buy such lists at address vendors, but this can be rather expensive. In addition, these lists always represent only a certain status quo, meaning they won't cover dynamic changes such as a change in management or similar. This means that such lists are often not only incorrect, but also become outdated comparatively quickly.  Experience has shown that the filtering options of such lists are also limited, which means that you are again faced with the corresponding additional expense.

Sales Intelligence tools such as Echobot solve the challenges the other options face for you. Echobot helps sales and marketing teams quickly find and evaluate target companies—and even provides customers with 360° company profiles. AI-based algorithms in the background let you find exactly the German companies you want to find. And it's completely DSGVO-konform!

Not only do you get insights into the target companies of your choice, but you can also search for companies within your Ideal Customer Profile (ICP) using a great variety of filters. Especially if you are interested in the size and turnover figures of a company, you can use Echobot to filter for important financials. Once you have found suitable companies, the Sales Intelligence Platform also gives you the option of viewing the matching contacts within a company, including publicly available contact data, e.g. email addresses, business phone numbers and social accounts. 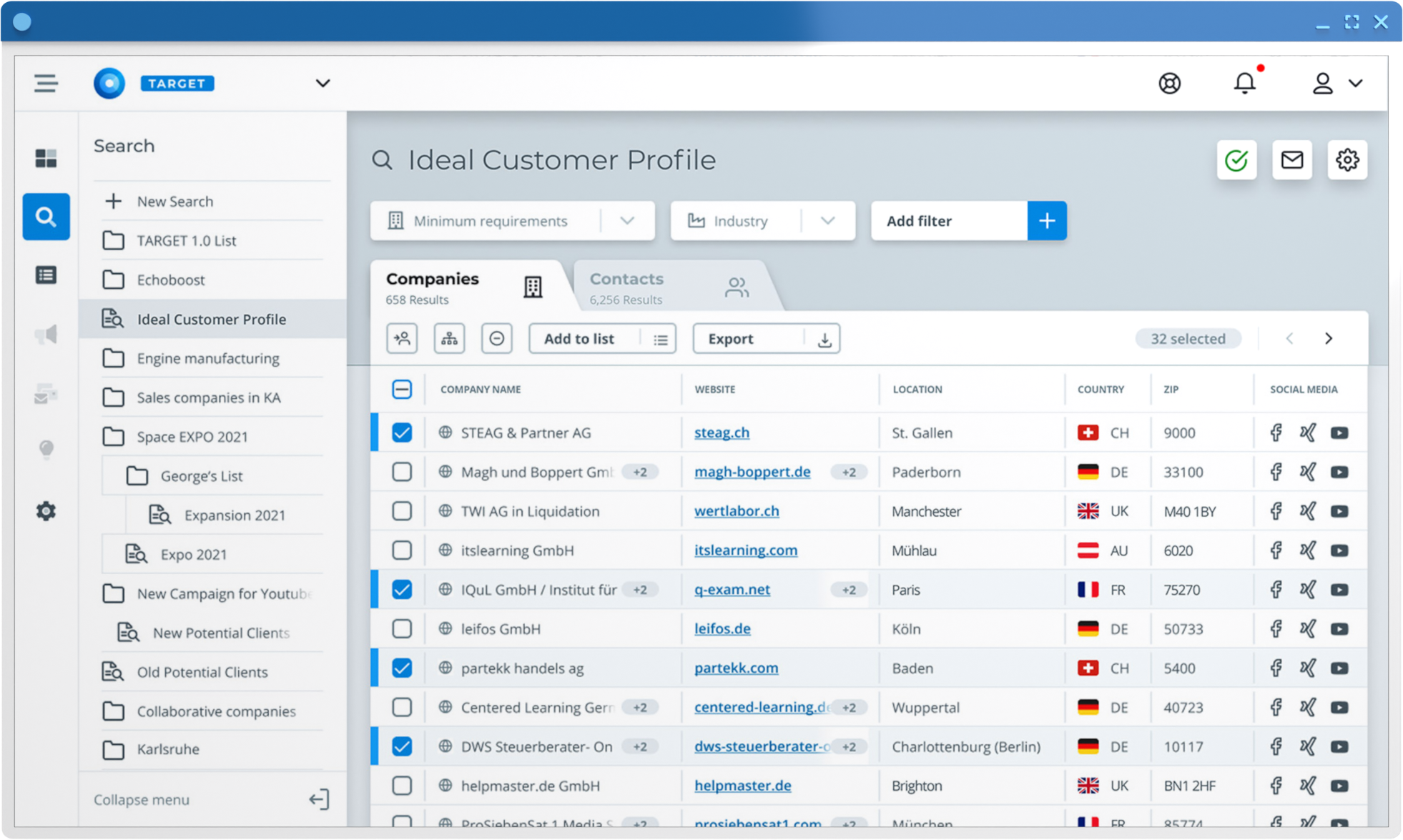 Germany is the leading economic and political power in the EU and Europe, making it one of the leading economic nations in the world. The country has successfully defended this position for decades thanks to its reliable companies. However, it is not always only the best-known and largest German companies that ensure its strong economy. A large number of successful SMEs supply the world with high-quality products. With their know-how and innovations, they satisfy their customers’ needs and are certainly ideal long-term strategic partners.

Now you have an overview of the corporate landscape in Germany. No matter which German companies of which size are relevant to you, it is always worthwhile to keep an overview of your target market—in the case of Germany, this may apply to the strong SME sector. Germany’s strong export can also be interesting for you. After all, this will give you an idea of which markets are already doing business with German companies and where you might be able to tie in.

14 Sales Triggers to Boost your Pitch

Data Enrichment in B2B: How to Complete Your Company and Contact Details in Seconds